I’m going to share a story from my childhood that will hopefully reveal how lucky we are in the West Midlands to have our very own ‘time travel’ capsule in the form of its internationally recognised UNESCO Global Geopark.

When I was 7 or 8 years of age, me and a group of friends used to regularly play hide and seek on the edge of this partially hidden limestone quarry up in Yorkshire which was completely overgrown in one area and so afforded some great places to hide.  It must have been about spring-time that year, because the place I had chosen to hide was amongst this thick stand of very tall white flowers with stiff ridge like stems that stunk of crushed carrot scented leaves.  It wasn’t until much later that I realised that it was called Cow Parsley.

Anyway, while I was sitting waiting to be found and trying not to giggle too much I realised my hand was resting on this funny shaped stone, which had a number of ridges and grooves running across it in a parallel fashion.  It was light grey and pretty big too.  While still hiding I forgot the giggles as I became quite intrigued in this funny shaped stone, what it was doing there and what it actually was.  It was clearly part of something bigger but had become detached from the rest of it sometime in the past.  I decided to pocket it and show my friends when they finally got round to finding me – after all I was in an amazing hiding place.

After the game stopped my friends and I came up with lots of plausible ideas about what it might be - ranging from the backbone of an extra-terrestrial, the teeth of an old horse that had long since passed away, or possibly an ancient carving made by stone-age person who also happened to be playing hide and seek in this place.  We all began to scour the floor of the quarry in search of the other pieces amongst the strewn rock debris that would once have been part of it but only found a couple of other odd looking pieces that we then shared amongst ourselves to take home.  I liked the look of this stone and decided to keep it on my chest top to think about it some more while I came up with a plan to discover what it really was.  Anyway, weeks past and I was still no further along to discovering its actual identity and how it came to being there despite annoying my mum to take the stone wherever we went so I could on occasion ask random strangers if they knew what it was.

My mum had taken it to the local pub, to school, village fetes, the queens silver jubilee event in the village, country fairs, the Saturday market and even the annual local Point to Point Derby, then there was a chance meeting with a chap on a train to town who turned out knew all about rocks.  He referred to himself as a ‘Palaentologist’ which was not only just a new word for me at the time but as much as I tried I just could not get my tongue around so smoothly as the name Fossil Hunter - which is what he actually was.  Well after telling him all about where I found it he was able to solve the riddle of what it was.  It was an Ammonite which was a sea creature that lived in Planet Earths seas sometime between 240 and 66 million years ago before becoming extinct at the same time as the Dinosaurs.  In shape they look like a very thick coiled rope. They are known as a cephalopod, a group of sea creatures with living relatives that you might of heard of that include the Octopus, squid, cuttlefish and nautilus.  Well, that pretty much ends the story of my childhood discovery which went on to not only become a life-long interest in the natural world and also a career.

What really stands out for me in my story, is that I had no idea what this rock was; who to ask or where to go to find out about it.  Finding this unusual rock was mightily inspiring for me as a young seven year old and so I hope that the existence of the UNESCO Global Geopark on our doorstep will inspire the next generation of ‘fossil hunters’ – (aka Palaentologist) to make their own discoveries out in the natural world either in their free time or through school related activities.   It’s not every day you get the opportunity to become a ‘Time Traveller’ and go on a journey from your doorstep out into the local landscape, while being taken back to the age of the dinosaurs in the space of a day.

As a partner to the Geopark, Natural England has been working with a number of other local conservation partners within the area of the Geopark through its Nature Recovery landscape project called Midlands Heathlands Heartlands (Purple Horizons).  This work aspires to connect local communities to a biodiversity enhanced landscape in and around the Geopark.

The Geopark is going to be an amazing resource for the region that not only helps us all understand and recognise the secrets hidden in the local rocks of this area, but will help to inspire us all to get out onto the footpaths and cycle routes across this area and explore all the hidden wonders of the natural world. 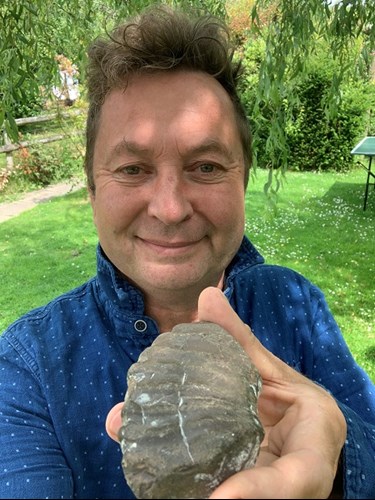