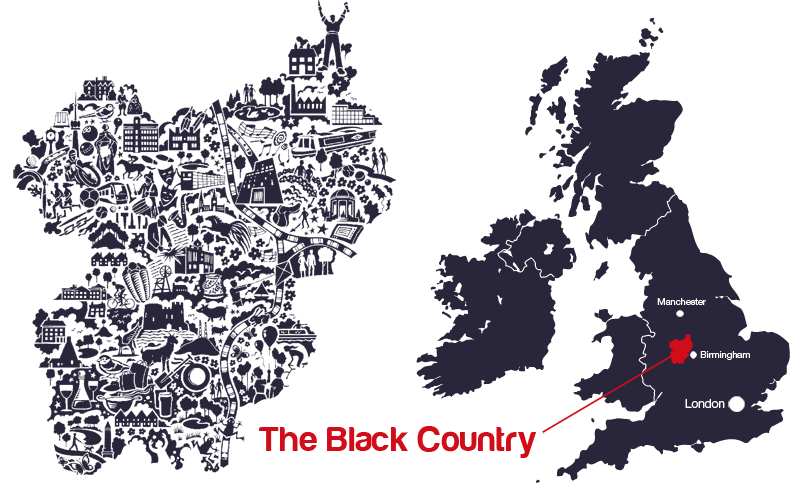 The Black Country is at the heart of Englands motorway network. Various locations and Geosites of the Black country can be easily accessed by road from these motorways. The M6 runs through the heart of the Black country in a roughly east-west direction. M6 junctions relevant to the Black Country are Junction, 7,8,9,10 and 11, serving the northern area of the Geopark. The M5 runs roughly south-north. its main junctions relevant to the Geopark access are junctions 1,2,3 and 4 providing entry points to the souther areas and Geosites of the Geopark.

The Black Country sits on the main railway line between London and Birmingham and onwards to northern cities such as Manchester. A number of stations within the Black Country are directly on this line including Sandwell and Dudley, and Wolverhampton City. Other rail routes into the Black country operate out of the city of Birmingham from three of its stations (Birmingham New Street, Birmingham Moor Street and Birmingham Snow Hill). The local routes operating from these stations access many other Black Country towns including Walsall, Stourbridge, Cradley and Smethwick Light rail and tram routes cover a host of other towns and a new cross Black Country Metro line is currently being installed between the towns of Wednesbury and Brierley Hill

The Black Country is accessible from a number of airports within 2 hours drive or rail travel time. Birmingham International airport to the east is the closest of these being 20 - 30 minutes rail travel time away, or approximately 45 minutes away by road. Alternative nearby airports include Manchester and East Midlands (Derby/Nottingham) where transfer times by road or rail networks are within 1 - 2 hours travel time from the Black Country. London airports are between 2 to 3 hours travel time approximately depending on travel conditions. All regional airports and national airports are well connected with road and rail networks. Connecting routes for rail and the need to change trains at intermediate stations apply in some circumstances.